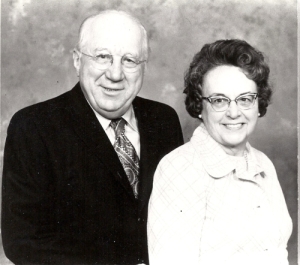 My father, Stephen D. Lockey Jr., MD, FAAAAI, was born April 29, 1904, the son of immigrants from Hungary. He worked at a variety of different jobs, including the Phoenixville Ironworks in Phoenixville, Pennsylvania, until he received a football scholarship to attend Franklin & Marshall College in Lancaster, Pennsylvania, where he graduated in 1928. He then attended Temple University School of Medicine in Philadelphia, Pennsylvania, graduating in 1932. After an internship at Lancaster General Hospital, he became a general practitioner in the small town of East Petersburg, Pennsylvania. His first patient log book dated October 8th, 1933, illustrates a typical day of practice. Charges for office visits ranged between $.35 and $2.50 and total receipts for the day were between $7.50 and $15.00. There were many no-charge entries because some patients could not pay. As did my brothers and sister, I acquired a great deal of inspiration from my father when I accompanied him on house calls in the town and surrounding farm community and accompanied him on inpatient rounds at the local hospital. He would proudly introduce us to his patients who seemingly enjoyed the unexpected visit.

Having witnessed his three-year-old brother’s death from anaphylactic shock after an injection of horse-derived antitoxin for diphtheria, my father cultivated a keen interest throughout medical school in allergic diseases, motivating him to journey several times weekly from Lancaster to the University of Pennsylvania where he did an apprenticeship with Drs. Warren T. Vaughn, Harry D. Witmer, and A. J. Clark, renaissance allergists in the U.S.A. As his skills and reputation developed, he relocated his practice five miles to the City of Lancaster where he gradually assumed the role of the area’s premier allergist. He became Chief of the Department of Allergy and founded the Lancaster General Allergy Clinic in 1935, which remains the oldest operating allergy clinic in a general hospital in Pennsylvania. He staffed several free clinics at the Hospital, each a half-day a week, joined by a number of physician colleagues. Charitable activities were expected of physicians at that time. In 1946, he co-founded the Pennsylvania Allergy Association and in 1948 became the first president of the Association, which is now known as The Pennsylvania Allergy & Asthma Association.

As a private practitioner, without academic affiliation or research grants, my father presented and published numerous articles on therapeutic interventions for the allergic patients, drug reactions and cross-reactivity of drugs, presenting papers at the American Academy and the American College annual meetings. He was recognized by his peers for his technical skills in preparing allergy extracts, a common practice at that time. He was also recognized by his community as an outstanding clinician and citizen, especially for his charitable work with the Boy and Girl Scouts, Salvation Army, his church, and for founding the Homestead Retirement Village in Lancaster, one of the most desirable retirement communities in the U.S.A.

My father received the Abraham Lincoln Award Citation from The American Hungarian Studies Foundation, presented at their annual meeting on May 31, 1974, for outstanding contributions to his community and to the profession of medicine. He and my mother were devoted to their family, community, medicine and the country in all respects. This is illustrated by the fact that their three sons became physicians, all still in practice. Stephen III, the eldest, is practicing allergy in Lancaster, James is Head of Occupational Medicine and Research at University of Cincinnati, and I am active in allergy/immunology at the University of South Florida. My sister, Doris Lockey Geier-Monroe, was a former executive at Survival Technology, which first developed the widely recognized auto-epinephrine injector, an idea derived from my father. My father's legacy in medicine continues through our family with grandson, Christopher Lockey, an assistant professor of Psychiatry at the University of Cincinnati and, grandson, Stephen Lockey IV, a medical student at Georgetown School of Medicine.

My father's favorite prayer was "Lord show thy healing power to me so that I may use it to comfort the sick and the disturbed: to disturb those who are too comfortable in behalf of others". He recognized that being blessed with the God-given gift of being a physician puts one into the position to fulfill that prayer. Therefore, it gives me a great deal of pleasure, on behalf of my family, to honor my father and mother, both of whom inspired us to pursue a career in the honorable field of medicine. Thank you.
--Richard F. Lockey, MD and Family

Dr. Lockey's Lectureship was sunsetted in 2017. If you wish to contribute in his honor, please make your donations to the AAAAI Foundation's GAIN Campaign, to fund research that leads to the prevention and cure of asthma and allergic and immunologic disease. Dr. Lockey's Family will be notified of your gift in memory, and your name will be listed as a donor in the Annual Report of the AAAAI Foundation. Your donation makes a difference. We appreciate your support and your commitment to our specialty.