William T. Shearer and Lynn Des Prez Lectureship: Investing Together in Our Future 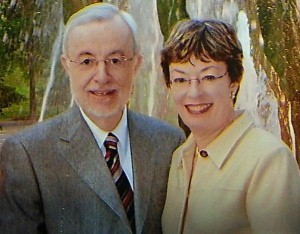 Shearer was active in professional and clinical immunology organizations at the national level for many years, serving as Director and Chair of the American Board of Allergy and Immunology (1990-1995); Director of the American Academy of Allergy, Asthma, and Immunology (AAAAI) from 1992-2002; Chair of AAAAI’s Clinical and Laboratory Immunology Committee which published the Core Content Outline for Clinical and Laboratory Immunology and the Practice Parameters for the Diagnosis and Management of Immunodeficiency; and member and Associate Editor of the Journal of Allergy and Clinical Immunology (2000-2015). He was elected Councilor (1997-2001) and President of the Clinical Immunology Society (2001-2002). For editing the Primer on Allergy and Immunologic Diseases 5th edition, he was given the Special Recognition Award by the AAAAI in 2004. In 2005, he received the Arnold J. Rudolph - Baylor Pediatric Award for Lifetime Excellence in Teaching.

Lynn Des Prez is a Philadelphia native and served as the Administrative Director of the American Board of Allergy and Immunology for 31 years, following a career in law and economics. Shearer and she shared a long-distance marriage until 2006, when she moved to Houston. She continues her involvement with allergy and immunology through Shearer’s many activities. She shares his philanthropic efforts via the AAAAI Foundation, and a Diversity Scholarship at Washington University in St. Louis School of Medicine. She served as 2011-2012 President of the AAAAI Associates in raising scholarship and asthma camp funds. In 1997 she received the AAAAI Distinguished Layperson Award. In 2002 she received the American College of Allergy, Asthma and Immunology’s (ACAAI) Distinguished Service Award. She has served professional and civic associations, was a church elder, and holds office in a prison ministry and Houston’s Etoffe Litteraire. She is interested in continuing education, health, finance, technology, and musical theatre.

Dr. Shearer passed away in October 2018. He is survived by his wife Lynn Des Prez, a sister and six children.

If you wish to honor Dr. Shearer and Ms. Des Prez, please consider a gift to the AAAAI Foundation and William T. Shearer and Lynn Des Prez Lectureship Fund. A donation in any amount can be dedicated to this effort. Dr. Shearer will be notified of your gift, and your name will be listed as a donor to this fund in the Annual Report of the AAAAI Foundation. Your donation makes a difference. We appreciate your support and your commitment to our specialty.